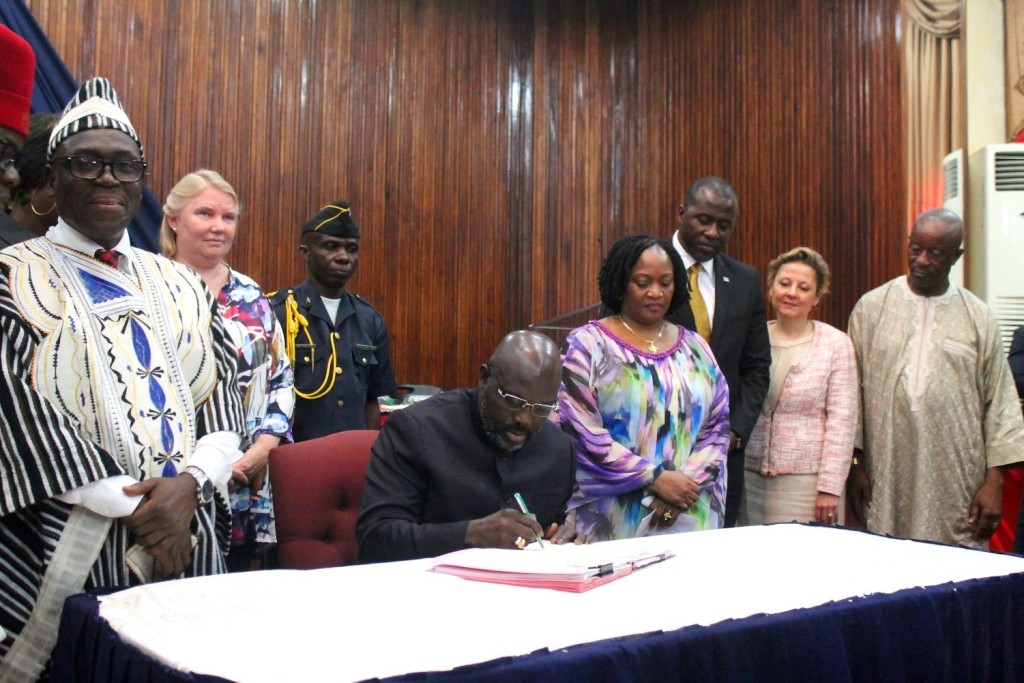 The Liberian Leader, His Excellency George Manneh Weah says the Land Rights Act (LRA) and the Local Government Act are currently being implemented.

President Weah made the disclosure on Wednesday, May 29, 2019, in a nationwide address on the current state of affairs of the nation.

It call be recalled that on September 19, 2018, President Weah signed into Law the Land Rights Act and the Local Government Act at the Ministry of Foreign Affairs in the presence of senior government officials, diplomats, and donor partners, local leaders, chiefs and civil society organizations, among others.

Under the LRA, the Liberia Land Authority (LLA) is granted the authority to promulgate regulations necessary for the implementation of the Land Rights Act, which is currently in progress, spearheaded by the Department of Land Policy and Planning in coordination with relevant departments of the LLA.

Following the signing of the LRA by President Weah on September 19 2018 and its printing and publication into handbills by the Ministry of Foreign Affairs on October 10, 2018, the LLA immediately embarked upon series of consultations with land stakeholders, which in large part, led to the development of the LRA Implementation Strategy, supported by the Land Governance Support Activity (LGSA), a USAID supported project.

The development of the LRA Implementation Strategy is the initial step to catalog all the components to be addressed in the Land Rights Act, including issues involved, constraints to be encountered and redress mechanisms during the implementation. The Strategy also contains an implementation and coordination framework, which involves the establishment of a number of interconnected structures responsible for oversight and guidance on technical issues such as developing work plans and roadmaps; 2) defining the roles of LLA’s County Offices and the County Land Boards, Land Donor Partners, Civil Society, Communities, Private Sector, etc.; 3) Financing the Implementation Plan and Resource Mobilization; and 4) Establishment of M & E Frameworks. The objective of establishing the implementation and coordination arrangements is to ensure continuous focus, commitment, coordination and accountability of efforts, resources, and outputs. The President of Liberia is providing global oversight under this arrangement, evident by his May 29th statement on the LRA.

Notwithstanding the modest progress, the greatest challenge facing the LLA and its partners is managing public expectations on how long this process will take and the efforts and resources needed to lead to the successful implementation of the Law.

Already, the LLA and LGSA, in collaboration with the Civil Society Working Group on Land Rights Reform and the Food and Agriculture Organization of the United Nations (FAO) have produced key messages on the LRA, which are currently being used by the LLA, LGSA and other land stakeholders to inform and educate the public so that they will have a clear understanding of the Law.

Additionally, as part of the information dissemination strategy, the LLA has developed and commissioned a website with the domain name, www.lla.gov.lr that is being updated regularly. The website also provides information on services being provided by the LLA, such as land deeds registration, processes in acquiring land, functions, and mandate of the LLA, the institutional structure of the LLA, etc.

The site has also created a section where people will interface with the LLA internally and externally, linked with a section called deliverables, which includes graphic design files, maps of land use, and studies on land tenure and women land rights.

Some of the notable provisions of the LRA include but not limited to the following: Article 11: Registration of Rights in Land, Section 4, and Article 37: Demarcation of Customary Land, Section 2, of the Law provides that within twenty-four (24) months of the Effective Date of this Act, the Government through the LLA working with communities, shall commence the conduct of a Confirmatory Survey of all the Customary Land in Liberia for the purpose of determining the size and boundaries of the Customary Land of each community.

The report of the Confirmatory Survey shall include the precise coordinates and maps of each Customary Land and after validation, the report shall immediately be probated and registered in keeping with Law, following the issuance of a Statutory Deed by the LLA.

Article 47: Tribal certificates, Section 1 stipulates that the holder of a valid Tribal Certificate issued prior to the Effective Date of this Act for which a Public Land Sale Deed was not obtained is granted a maximum of twenty-four (24) months to finalize and complete all the steps necessary to obtain a Public land Sale Deed. The validity of Tribal Certificates shall be determined by a rigid validation process involving the community conducted by the Liberia Land Authority.

If the holder of a Tribal Certificate does not obtain a valid Public Land Sale Deed within twenty-four (24) months, the Land, subject matter of the Tribal Certificate, shall revert to the Community and become Customary Land.

In support of the implementation of the law, the LLA with special budgetary support from Ministry of Finance and Development Planning (MFDP) under the Millennium Challenge Corporation (MCC) Eligibility arrangements, undertook awareness-raising activities on the LRA in May 2019 in two communities within Margibi County. Similar awareness activities are to shortly commence in two communities in Rural Montserrado County.

Several donor-funded activities in support of the LLA and the implementation of the LRA are on-going. They include the World Bank supported Liberia Land Administration Project (LLAP); the Swedish International Development Agency (Sida) supported capacity building project, titled: Capacity Building for Inclusive Land Administration and Management in Liberia; the International Land and Forestry Tenure Facility Project; the Land Rights project funded by the European Union (EU), and diverse support from the United Nations system. The donor community’s support to both the LLA and LRA implementation is immeasurable and an expression of unflinching commitment to land reform in Liberia.

However, the declaration by President Weah that the implementation of the Land Rights Act is on course, clearly demonstrates the political will of the President in ensuring that the LRA is implemented appropriately, which is critical in minimizing disputes and conflicts over land that would eventually lead to maintaining the peace and security of the nation.

Further, the LLA Board of Commissioners is in the processing of advising the President to appoint members of National Consultative Forum (NCF), which will be composed of members with practical experiences in land matters, with a mandate to discuss the affairs of the LLA, as required by the LLA Act. The appointment of the members of the NCF will assist the LLA with a range of recommendations for the implementation of the LRA.