LLA and LGSA Heighten Awareness on the Land Rights Law 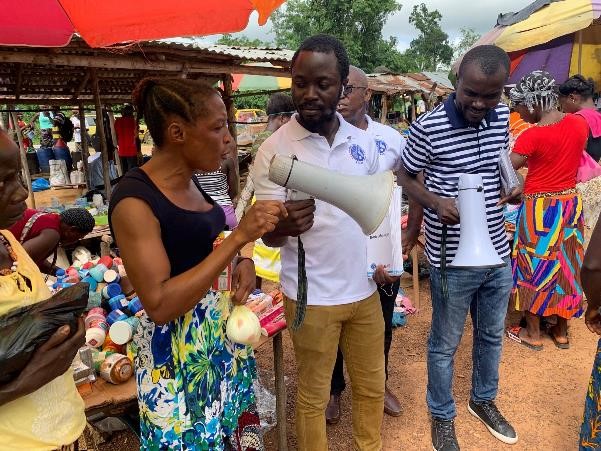 The Liberia Land Authority (LLA) and the Land Governance Support Activity (LGSA) of USAID have intensified awareness on the Land Rights Law of 2018 in five counties.

The awareness campaign is intended to cover the fifteen counties of Liberia with a view to inform the public about the key provisions in the Land Rights Law, with emphasis on the customary land rights category, which includes tribal certificate registration and concessions within customary communities.

Getting the communities involved in such campaign was very vital as it helped to provide relevant and useful information to the people in the communities of the five counties how to use land resources to help meet their development needs. It also showed them their role in helping to ensure that their rights are protected, and their welfare respected when the LLA begins the full implementation of the Land Rights Law shortly. This will help to ensure sustainability of the information and get communities involved in the implementation of the law.

At the broader level, the local media institutions were also major channels of communicating the information to the target audience as they were called to play radio spot messages and jingles as well as hosting the awareness team on radio talk shows. The messages and jingles were aired for the large part on stations that participated in the LLA and LGSA media training on reporting the land sector, and have already started running programs dedicated to land issues on their radios about what they learnt and what the people are eager to know.

During the campaign, Information, Education and Communications (IEC) materials were distributed amongst the populace to enable them better understand the law and also spread the messages amongst their families and friends. These materials included stickers, brochures, and frequently asked questions booklets.

Those who were opportune to listen and participate in the discussions and radio phone-in talk shows, expressed their gratitude to the LLA and LGSA for the initiative to enlighten citizens on the details and contents of the law. They also called for more to be done so that the messages can reach many other residents in hard- to- reach communities around the country.

Already, the LLA and LGSA, in collaboration with the Civil Society Working Group on Land Rights Reform and the Food and Agriculture Organization of the United Nations (FAO) have produced key messages on the LRA, which are currently being used by the LLA, LGSA and other land stakeholders to inform and educate the public so that they will have a clear understanding of the Law.

Additionally, as part of the information dissemination strategy, the LLA with support of LGSA has developed and commissioned a website with domain name, www.lla.gov.lr that is being updated regularly. The website also provides information on services being provided by the LLA, such as land deeds registration, processes in acquiring land, functions and mandate of the LLA, institutional structure of the LLA, etc.

The site has also created a section where people will interface with the LLA internally and externally, linked with a section called deliverables, which includes graphic design files, maps of land use, and studies on land tenure and women land rights.

In support of the implementation of the law, the LLA with special budgetary support from Ministry of Finance and Development Planning (MFDP) in support of meeting the Land Rights and Access requirements under the Millennium Challenge Corporation (MCC) Eligibility arrangements, undertook awareness raising activities on the LRA in May, 2019 in two communities within Margibi County. Similar awareness activities are to shortly commence in two communities in Rural Montserrado County.

Since the inception of the LGSA project some four years ago, several awareness raising activities and training of journalists at the community and national levels have taken place with immense success, whereby journalists can now go beyond just fetching land related news but also they can interpret the Land Rights Law and the Act against the Criminal Conveyance of Land to their audience.

However, the recent declaration by President George Weah that the implementation of the Land Rights Act is on course, clearly demonstrates the political will of the President in ensuring that the LRA is implemented appropriately, which is critical in minimizing disputes and conflicts over land that would eventually lead to maintaining the peace and security of the nation.

In a related development, Mr. Richlue BURPHY was on June 12, 2019 guest of a popular radio talk show, dubbed, “Land is Life”.

This program is being sponsored by the LLA, LANDESA and the State-run, Liberia Broadcasting Service (ELBC), with Dr. Emmanuel K. Urey, a land expert and Daniel Ankra, a broadcast journalist serving as presenters and producers, respectively.

The phone-in radio talk show attracted many callers including women who wanted to know about their land rights and what government was doing to prosecute those involved in the multiple sale of land.