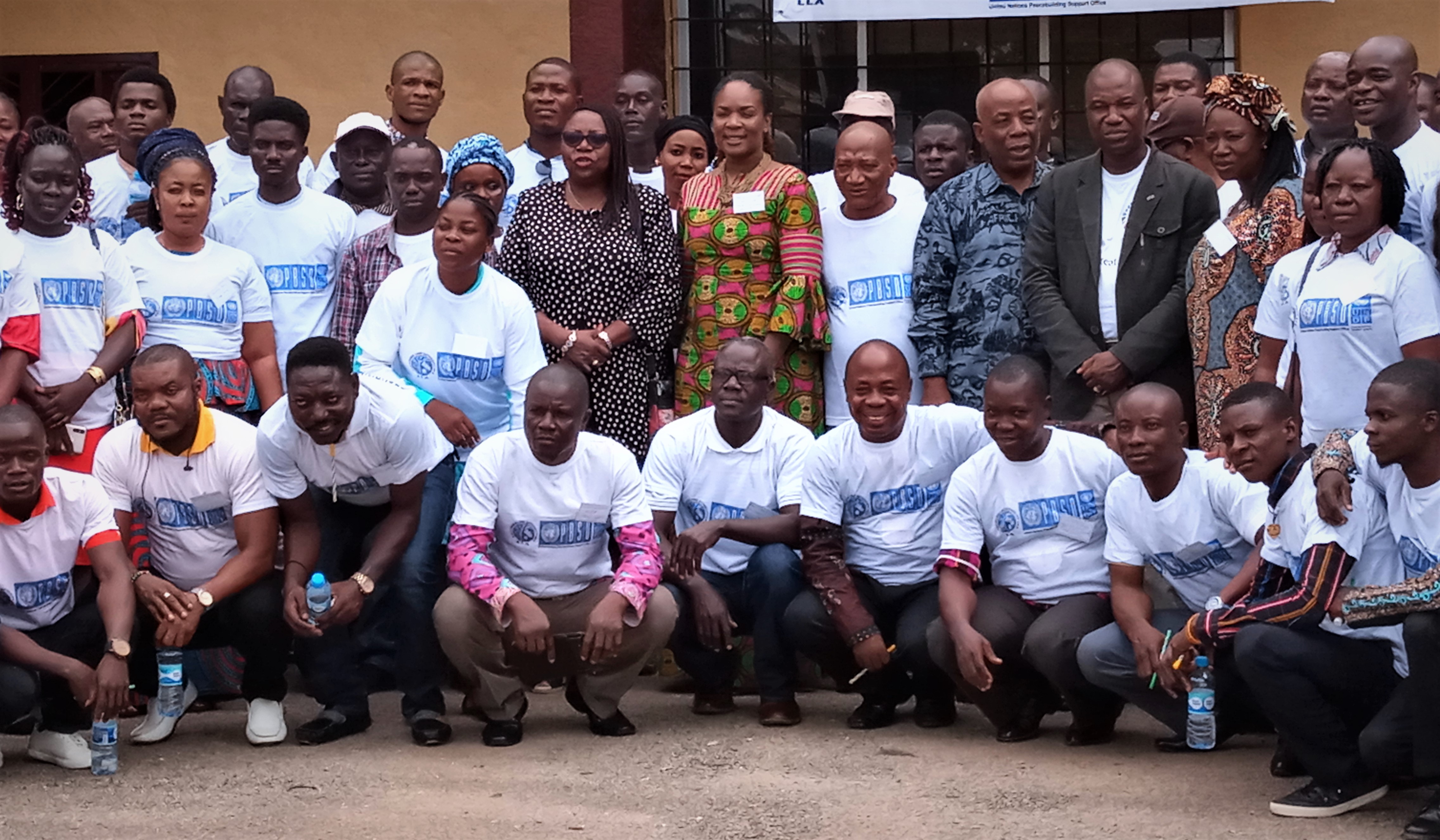 The program which was held at the Administrative Building in Gbarnga City commenced on August 26, 2019 and ended on August 28, 2019. The program brought together One Hundred and Twenty-Seven (127) participants from three counties, namely, Montserrado, Bomi and Bong Counties. The event is an expression of the ongoing collaboration with major donor partners, such as the UNDP and the LLA, and it was organized to inform local authorities on the various categories of land as enshrined in the Land Rights Act/LRA with specific focus on Public Land.

Speaking on behalf of the UNDP Country Director at the opening of the workshop, Mr. Robert Dorliae, Project Manager for Concession & Conflict Prevention, UNDP, firstly thanked the organizers and residents of Bong County for hosting the event. He encouraged participants to take the awareness workshop seriously. According to Mr. Dorliae, the workshop was organized not only to promote the Land Rights Act/LRA, but also to promote peace and social cohesion among Liberians. Mr. Dorliae also called on the LLA to translate the Act in local vernaculars for the better understanding of those in the rural areas.

He said if the Act is summarized it will not only help Campaigners of the Act in Montserrado, but also those in Bong, Nimba, Maryland, Sinoe, Cape Mount, River Gee, Bomi, Gbarpolu, Margibi, Rivercess, Lofa, and the rest of the counties to carry out community based public awareness campaigns on the Land Rights Act using local radio stations and other modes of communications, such as drama.

He used the occasion to encourage participants to take seriously the workshop, noting that whatever acquired should not only benefit an individual, but should be spread throughout communities in Liberia by the participants. Mr. Dorliae called on participants representing the three counties to continue preaching the message of peace. “It is now time for us to live as one people. To work together as one group of people to promote peace and social cohesion.” Mr. Dorliae said.

He lastly thanked the Liberia Land Authority/LLA, Liberia Peace Building Secretariat/LBSO & United Nations Development Program/UNDP for the successful commencement of the workshop. He used the occasion to inform the Board of Commissioners of the Liberia Land Authority of the United Nations Development Program/UNDP’s commitment to working with the LLA leadership, hence, UNDP as traditional partners will always be available to provide the needed assistance to the LLA.

Speaking on behalf of the Superintendent of Bong County, Hon. Lucia Herbert, City Mayor of Gbarnga thanked the LLA & UNDP for organizing such a unique awareness program. She used the time to welcome Chiefs, Stakeholders, CSOs & NGOs, Youths, especially those from Montserrado and Bomi Counties to the City of Gbarnga, Bong County. She also used the occasion to express the need for the law to be made simple for those in the rural areas. She said if the law is made simple it will help campaigners (CSOs & NGOs) like DEN-L operating in the rural areas to better interpret the laws to ordinary Liberians.

Hon. Lucia Herbert who once served as Development Superintendent and Superintendent of Bong County respectively, called on journalists attending the three-day event to help spread the message that. “Land matter in Bong County remained a nightmare for authorities in the county, thus, it must be taken seriously by all stakeholders in the land sector, especially the Liberia Land Authority/LLA”.

She further used the occasion to call on Surveyors in the county to do the right thing. “I am calling on the Surveyors including all those residing on government land to do the right thing. We will give you trouble for trouble. We wouldn’t rest until the right thing is done!” She said. Hon. Herbert also used the occasion to call on persons who have encroached on the Government’s 19 acres of land within the Presidential Palace and Bong County Technical College to get ready for trouble. “You cannot encroach on government land and be made to go free. It is better you rethink your decision now than latter, because, trouble is coming your way soon.” She stated. Hon. Herbert lastly called on men to give space for women to take ownership of property.

Meanwhile, speaking on behalf of the Chairman designate of the Liberia Land Authority, Cllr. Kula L. Jackson, Commissioner responsible for Land Policy & Planning, LLA, firstly thanked the Chiefs and people of Bong county for opening up their doors to host the three-day Public Land Awareness Program.

Cllr. Jackson said the Chairman designate, Hon. Atty. J. Adams Manobah, Sr. remained grateful to the people of Bong County for their commitment towards the implementation of the three-day event. He also used the occasion to call on persons who are engaged in the sale of Public Land as well as those who have encroached on Public Land to do themselves good by disengaging those lands. “You cannot be grabbing government lands. There are some of us within the city limit on land that we do not have deed for. As you all know, the theme says securing public land for economic development, thus, we are coming for those lands.” He said.

Cllr. Jackson further informed participants from the three counties that the LLA remained committed to providing residents within the fifteen counties with education on land matters. He said, “How can government provide more jobs when the land the concession companies are to use are occupied by you? Let me inform you that the LLA is about to conduct comprehensive inventory and survey so as to secure all public land.” He further used the occasion to call on all those without deeds to make sure to visit the offices of the LLA to have their deeds processed within time.

The three-day program focused on several issues including, Understanding the Institutional & Organizational Arrangement of The LLA Including County Land Offices and County Land Goals, Meanings & Distinctions Between the Four Categories of Land, The Significance of Public Land & How Communities Can Assist in The Management & Safeguarding of Public Land for Future Use and The Implementation of the Land Rights Act/LRA.

During the three-day program expert presenters presented on the meanings & distinctions between the four categories of land, the significance of public land & how communities can assist in the management & safeguarding of public land for future use, the implementation of the Land Rights Act/LRA and status of the nation-wide confirmatory survey.

The program brought together Thirty-Nine (39) female and Eighty-Eight (88) male participants from the three counties.