LLA, NCD and NUOD hold awareness workshops on the LRA and NAP 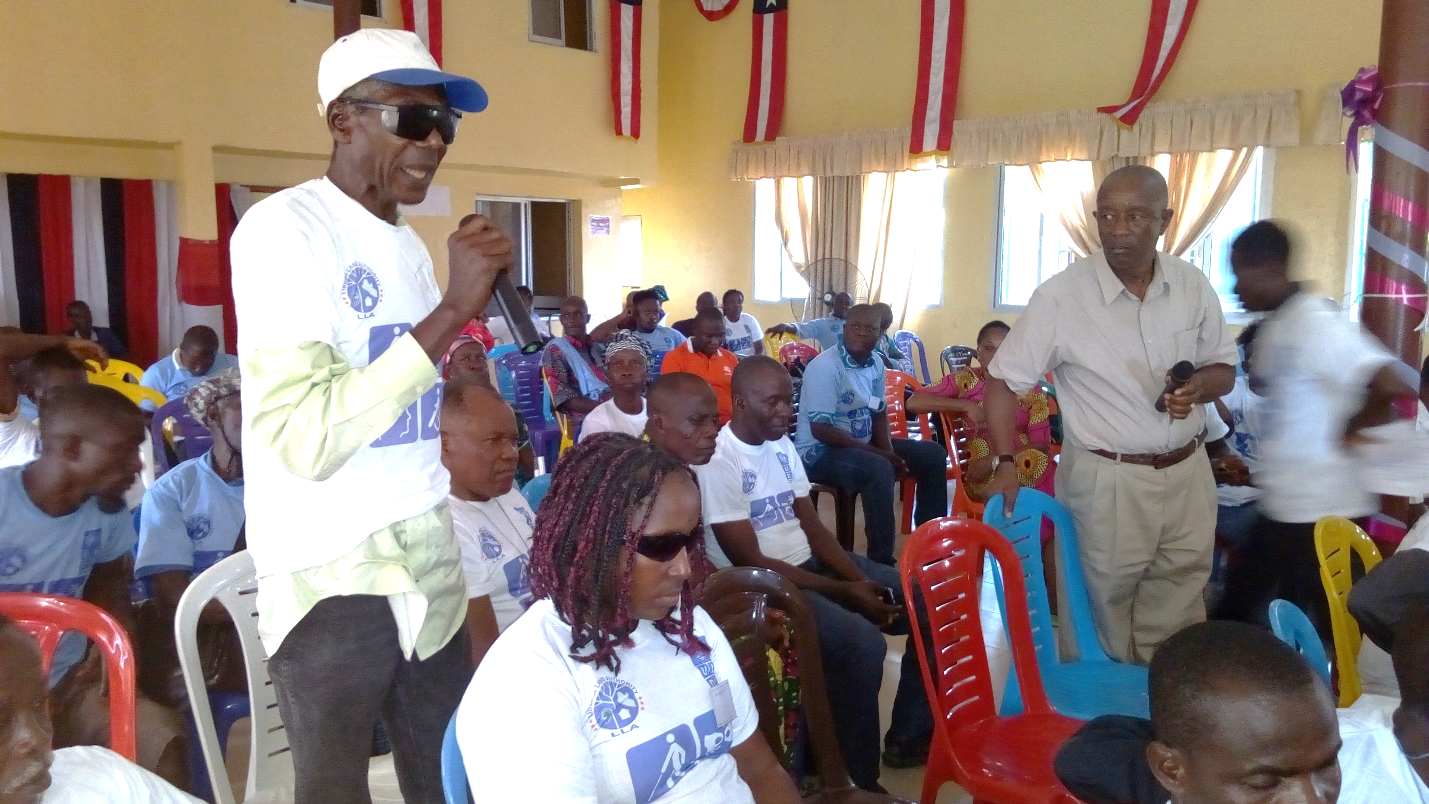 Stakeholders, mainly representatives from the disabled community and the land sector have ended two separate awareness workshops on the Land Rights Act (LRA), the Liberia Land Authority Act (LLA) and the National Action Plan (NAP) for the Inclusion of Persons with Disabilities (PWDs) in Liberia.

Organized by the Liberia Land Authority (LLA), National Commission on Disabilities (NCD) and the National Union of Organizations of the Disabled (NUOD) with funding from the United Nations Development Programme (UNDP), the first phase of the two workshops was held in Tubmanburg, Bomi County on October 17 and 18, 2019 and brought together participants from Bomi, Grand Cape Mount and Gbarpolu counties, while the second phase of the workshop was held in Buchanan on October 22 and 23, and brought participants from Grand Bassa, Margibi and Rivercess counties. Approximately, 400 persons attended the two separate sessions.

Held under the theme, “Ensuring Land Rights for All” the workshops addressed key provisions in the Land Rights Act, the mandate and institutional arrangements of the LLA, and the National Action Plan for People with Disabilities.

Speaking during the opening ceremonies, the LLA Chairman designate, Atty. J. Adams Manobah gave an historical perspective of customary and statutory land laws, and quoted Article 34(3) of the Land Rights Act, which states that all members of a community have equal rights to the use and management of Community Land, regardless of gender, ethnicity, religion and disability.

Atty. Manobah indicated that the disabled communities have equal rights to be aware of their land rights, stating, “Being disabled does not mean you are unable and disability does not mean inability”.

He noted that there are people who can’t read the Land Rights Act but they need to be told and given special attention to understand the Law because there should be no discrimination about peoples’ right to know.

He assured that henceforth, the LLA will include PWDs in all of its activities including training opportunities with emphasis on women’s right to use and own land.

Speaking at the workshops, the Executive Director of NCD, Mrs. Recardia Dennis inspired her compatriots not to be complacent because of their condition but rather to engage into small income generating enterprises that would move them away from the dependency syndrome.

She advised them to remain steadfast as efforts are being made to fully implement the five-year National Action Plan, 2018 – 2023, so that the link between disability and poverty due mainly to the widespread exclusion of PWDs in education, health care, employment, economic activities and social participation can be minimized, if not eradicated.

Mrs. Dennis encouraged the participants to spread the knowledge acquired from the workshops particularly issues relating to land rights, land ownership and responsibilities so that other community members who were not privileged to attend the workshops can also benefit from the information.

Also speaking at the events was Mr. Boye Johnson, UNDP Programme Associate for Governance and Public Institutions who spoke on the need to build synergy between PWDs, Government ministries and agencies, as well as the United Nations organizations and other international donor partners.

Mr. Johnson pinpointed that the National Action Plan (NAP) is the relevant instrument for the promulgation and elaboration of the UN Convention on the Rights of Persons with Disabilities (UNCRPD), which in itself is an embodiment of the rights of PWDs.

He then noted that the NAP seeks to address the Sustainable Development Goals (SDGs) by reducing poverty under the theme “Leaving No One Behind”.

Despite the principle of equality conveyed in the Articles, a segment of the Liberian citizenry, Persons with Disability (PWD), may not enjoy the benefits of land ownership, particularly in communities with customary land, due in large part to negative attitude and stereotyping, and the widely held belief that PWDs are weak, incapable and unable to make decisions regarding customary land, a situation which is abundantly evident in their marginal participation, if any, in consultations and decision making concerning land.

In addition to their negligible participation in consultations and decision making regarding land governance, PWDs have never featured prominently in programs and activities related to land neither have they been specifically targeted for awareness on land issues and matters.

Hence, these two separate workshops organized by the LLA, NCD and NUOD with funding from UNDP should send a positive signal to policy and decision makers that PWDs should be included in all developmental activities with priority actions in the six areas: Public accessibility, Inclusive Education, Employment and Livelihood, Health Care, Independent Living & Self Determination, and, Access to Justice & Social Protection.

The two sessions also featured presentations from experts on several topics including the descriptions and meanings of the four recognized categories of land rights; confirmatory survey of customary land, the establishment of community land development and management committees; and the mandate and institutional arrangements of the LLA.

Three persons have been ...

The Liberian Senate has ...