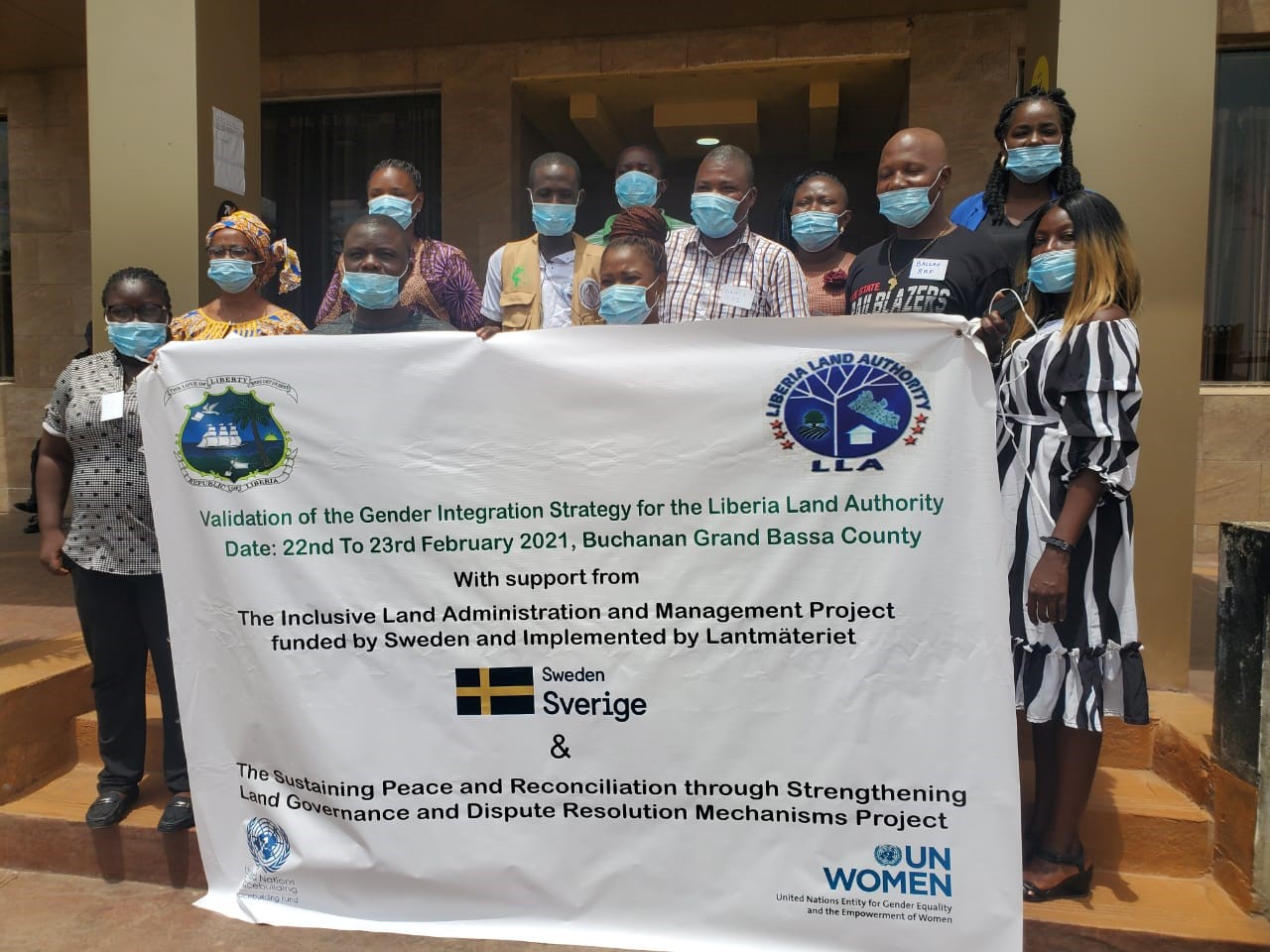 The Liberia Land Authority (LLA) through its Gender Unit, and with support from, UN Women, United Nations Peace Building fund and the Sweden funded Inclusive Land Administration & Management Project (ILAMP) implemented by Lantmateriet” held a two-day validation workshop for its Gender Integration Strategy in Buchanan City, Grand Bassa County. The objective of the validation workshop which took place in the Conference Hall of Hotel Buchanan from Monday February 22 to Tuesday February 23, 2021, was to generate comments and inputs from donor partners and key stakeholders for consideration, where appropriate in finalizing the Gender Integration Strategy that was developed by the Gender Unit of the LLA.

The Gender Integration Strategy operationalizes the Liberia Land Authority’s commitment and resolve to implementing the Constitution, the Land Authority Act (LAA 2016), the Land Rights Act (LRA 2018) and other regional and international treaties ratified by the Government of Liberia (GoL) that protect and promote gender equality with respect to land and property rights of women (WLRs).

While giving the overview of the GIS, Madam Martha Summerville, LLA’s Gender Officer, indicated that in 2018, the Liberia Land Authority, with support from USAID- Land Governance Support Activity (LGSA) and other stakeholders, established the Gender Unit of the Authority to ensure that gender issues are addressed and mainstreamed throughout the land reform processes, with an objectives to strengthen the capacity of all LLA staff in gender and women’s land rights (WLRs), develop gender mainstreaming tools and foster engagement and partnerships among stakeholders in the land sector, support senior management in the development of a gender strategy for its mission, and ensure that women, men, boys and girls fully and equitably enjoy access, use, and control of land and equally participate in land governance in an effective and meaningful way.

Mrs. Summerville said, the Integration Strategy, if finalized, will promote gender equality in access to land and protect women’s land rights with the aim to transform gender disparities in access, use and control over land and the resources on the land. The GIS also aims to capture the LLA’s gender mainstreaming and women’s empowerment works in order to determine successes to strengthen and bridge gaps in institutional structures, practices, projects and programs.

According to the Gender Unit, the GIS was developed via practical application of several proven methods which include the review of internal and external gender and women’s land rights policy and regulatory documents to guide the development of the GIS, the Land Rights Act (LRA 2018), Implementation Strategy of the LRA 2018, The LLA’s 5-years Strategic Plan, as well as relevant regulations and policies, monitoring & evaluation (M&E) tools, amongst others guidance documents.

Making remarks during the opening of the workshop, LLA’s Vice Chairperson, Madam. P. Bloh Sayeh and the Commissioner for Land Policy and Planning, Cllr. Kula L. Jackson, both on behalf of the Authority and in their own capacities, thanked the LLA’s Gender Unit and partners (LGSA and Landesa) for their support in the development of the Gender Integration Strategy that will enhance coordination and collaboration amongst stakeholders within the land sector and elevate women’s effective participation in land management and governance structures at all time.

Madam P. Bloh Sayeh maintained that in order to develop a successful gender mainstreaming strategy in any organization, it is vital to have in-depth knowledge of the organization, including its processes and mode of operation.

One crucial development that was flagged out during the workshop was the fact that relevant gains has been made in terms of mitigating the gender disparities within the LLA’s work force between the time interval of developing the GIS and the validation workshop. It was also made clear that Gender Equality and Women’s Land Rights are constitutional rights that must be promoted and enforced with the right attitude, not with an attitude that will create unintended harm to women, girls and communities.

Participants at the two-day Validation workshop, were divided into three (3) working groups in order to review thematic areas: 1) Coordination and Collaboration, 2). Policy and Law/Regulations and 3) Gender Sensitive Monitoring, Evaluation and Learning) of the GIS and provide inputs. The working groups included both senior management and junior level staff of the LLA, as well as donor and implementing partners.