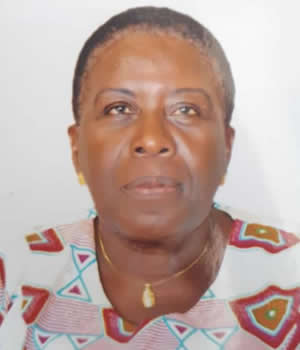 The Vice-Chair of the Liberia Land Authority (LLA), Hon. Philomena Bloh Sayeh is a career teacher, researcher, and manager. Born in Monrovia, Liberia, Ms. Sayeh acquired a Bachelor of Arts Degree in West African History from the University of Liberia in 1981. She then later matriculated to West Virginia University in Morgantown, West Virginia, the United States of America, where she obtained a Master of Arts Degree in East African History in 1987. She is also versed in African American History and Developmental Studies.

Before her appointment as Vice-Chair of the LLA, Ms. Sayeh served as Assistant Professor, Department of History, University of Liberia. She also taught Adult Basic Education from 1999 to 2001, at the Department of Alternative Programs, Montgomery County Public Schools, Silver Spring, Maryland United States of America. Between 2008 and 2018, Ms. P. Bloh Sayeh held the mantle of authority as Director-General of the Center for National Documents and Records Agency (CNDRA). As a multifaceted agency, the CNDRA is a national repository for government records and documents, including a registry for marriages. During her tenure, the Agency also served as the registry for land deeds, until such function got transferred to the Liberia Land Authority along with other ministries that were performing land functions. Due to her managerial skills and other professional attributes, Ms. Sayeh led the implementation of several projects that made the CNDRA gain maximum benefits and grants. Besides, she supervised, rebuild, and developed an internal management system and built staff capacity that turned the Agency from a dysfunctional one to a functional one.

Apart from her resourcefulness in academia, as stated above, Ms. Sayeh in the course of her participation and professional activities and roles, served as Assistant Minister for Administration, Ministry of State for Presidential Affairs, Interim Government of National Unity (IGNU) from 1991 to 1995. As Assistant Minister, she provided direct supervision of the Personnel Department, supervised logistics, and managed the Presidential non-expenditure funds efficiently and transparently. In consideration of her managerial competencies and furtherance of her career goals, she gained employment at the Sahara Trading Company in 1997 as Manager for Administration. At this entity, she provided supervision for personnel, procured logistics, and maintained international and local business partnerships

Ms. P. Bloh Sayeh comes to the position of Vice-Chair of the LLA, with a high degree of personal skills and competencies. She is assertive, analytical, and has strong managerial skills intertwined with integrity and sound organizational planning and implementation of programs and projects. She is one of the architects that participated actively in a series of consultative meetings that ushered in the establishment of the Land Commission in 2009. She also served as a member of the Transitional Team under the Interim Land Task Force (ILTF) in 2015 which paved the way for the establishment of the LLA in 2016.

Throughout her long and distinguished career, Ms. Sayeh attended several local and international conferences, workshops, and seminars numerous to mention.