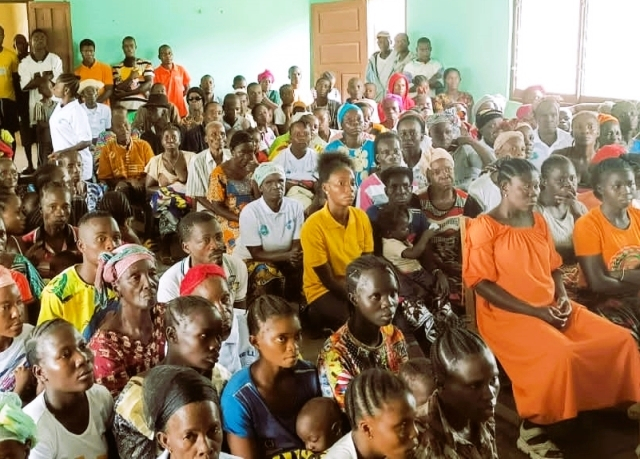 As information dissemination on the LRA, LLA ACT, AACCL, and other land-related laws, regulations, and guidelines remain key to the management and staff of the Liberia Land Authority (LLA), the LLA with support from Lantmätariet-Sida funded Inclusive Land Administration and Management Project (ILAMP) has commenced robust awareness activities across several communities in Nimba County.

Further, the awareness in Nimba County is a continuation of the just ended awareness campaign in Lofa County which brought together several stakeholders, including local government officials, traditional leaders, women and youth groups, persons with disabilities, and marginalized groups.

However, some local government officials and traditional leaders have expressed thanks to the people of Sweden for the support. Speaking during one of the team engagements in Zortapa, Gbahleh-Geh District, Hon. Chief Akey Vasiee, Town Chief of Zortapa, expressed thanks and appreciation to the people of Sweden and the Liberia Land Authority for such a great exercise. He said it is now time for all, including local government officials and traditional leaders to accept the Land Rights Law and abide by what it says.

"This is the law. And I am happy it is here to stay. Women are Liberians like the men, therefore, I am very happy to see the LLA family in our community. It is now time for all Liberians, especially local government officials and traditional leaders to embrace this law and help in the formalization of their customary lands so that women who do not have land can take hold of residential and agricultural lands for themselves. Today the people of Zor-Tapa are happy because we have started the process to get our Statutory Land Deed from the government for our community land." He said.

Chief Vaisee made this remark during a town hall meeting organized by the LLA in close collaboration with the leadership of the community.

The awareness is focused on the Land Rights Act, the LLA Act, and the Act Against Criminal Conveyance of Land, including other National and International framework documents that promote and protect women and girls' rights to property.

The awareness is being conducted by the technical staff of the LLA and representatives from Civil Society Working Groups within the land sector.

Did You Like This Post? Share it
« LLA hosts two days of Revision and Realignment of the LLA Strategic Plan to the PAPD LLA Ends Awareness on Women's Land Rights in Nimba County »