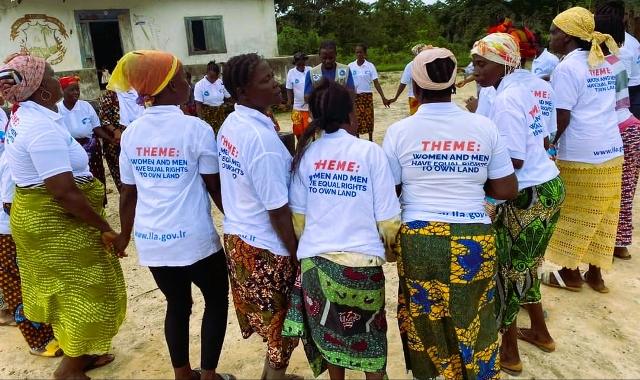 To increase awareness of the Land Rights Act (LRA) of 2018 and the LLA Act of 2016, including other national and international legal instruments that promote and protect women and young girls, people with disabilities, and marginalized groups, the Liberia Land Authority (LLA) with support from Lantmäteriet-SIDA funded Capacity Building for Inclusive Land Administration and Management Project (ILAMP), has ended a robust awareness campaign on the dissemination of information on the LRA, LLA Act, AACCL and other land-related laws, regulations, and guidelines in fifteen selected communities in Nimba County.

The awareness campaign which commenced in May of this year and ended June 2022, in selected districts across the county covered fifteen (15) selected communities, namely, Sehyikimpa, Zor-Gowee, Zor-Tehipa, Zor-Gbarplay, Gboa-Gbalasonah, Dou-Tiayee, Loyee, Gbei-Tengbe, Douwin, Zaglay, Zuoplay, Korsen, Tunupuyee, Whipa and Garr-Busie. The awareness campaign which is currently ongoing in Bong County and expected to end in Margibi County is being held under the theme: “Women and Men Have Equal Rights To Own Land”.

The campaign is being conducted by technical staff from the LLA Gender Unit, Communications and Outreach Division, County Land Offices and representatives from Civil Society Organizations (CSOs) working within the land sector of Liberia. The awareness campaign is intended to enhance the knowledge and understanding of residents within the fifteen (15) selected communities, especially those living within customary communities of their rights, roles, responsibilities and benefits as enshrined within the LRA, LLA Act, AACCL and other land-related national and international legal instruments that protect and promote human rights. The robust awareness exercise which is being widely celebrated by rural women and local authorities in the selected counties is also intended to minimize land disputes and conflicts and as well inform and educate residents of the function and mandate of the LLA, including the Authority’s operation across the fifteen counties.

However, during the awareness campaign, several stakeholders including local government officials, traditional leaders, chiefs and elders, including women and youth groups who graced the Townhall meetings held by the team across the selected communities consistently praised the Swedish people for supporting such exercise in the country. They further thanked the team and the LLA for coming with such an important information.

Speaking in an interview with LLA Communications and Outreach Officer at the end of a daylong Townhall meeting, Hon. Kpeiah Pertean, Chief Zuoplay Township, thanked the team for coming but warned that the land issues currently unfolding in Nimba and Grand Gedeh with Liberians and Burkinabes must be taken seriously to avoid serious conflicts. He said what is happening in there could be due to lack of proper information, thus, called on the LLA to quickly intervene.

“We cannot live in the past, especially with the passage of the Land Rights Law. If the government (LLA) cannot do more with awareness, trust me, Liberia may go back to where we came from. I am a young man though serving as Chief for my people, yet my education tells me that lack of information is harmful to any society. Liberia is all we have, and our donor partners have so much investments in this country for land disputes and conflicts to destroy. This is why you (LLA) need to be talking over and over to ensure that the right thing is done. This is why you don’t need to come to Zuoplay alone, go to other counties and communities where there is lack of information.” He added.

The Liberia Land Authority (LLA) remained committed to ensuring that every Liberian, especially those within rural Liberia are informed, educated and sensitized of their rights, roles, responsibilities and benefits, including the provision of adequate information on the mandate, responsibilities and services of the LLA across the fifteen subdivision of Liberia.

Note: For more information on the LRA, LLA Act, AACCL, and other land-related laws, regulations and guidelines, kindly tune into Freedom 89.9 FM every Wednesday from 3:00 PM to 4:00 PM to listen to technical staff of the LLA as they educate, sensitize and inform the general public of their rights, roles, responsibilities and benefits as enshrined within LRA, LLA Act, the Act Against Criminal Conveyance of Land and other land-related laws, regulations and guidelines, including the services being provided by the LLA across the country.

Did You Like This Post? Share it
« LLA Commences Awareness On Women's Land Rights In Nimba County LLA Chairman Speaks On Land Governance At The First Assembly of God Church In Liberia »