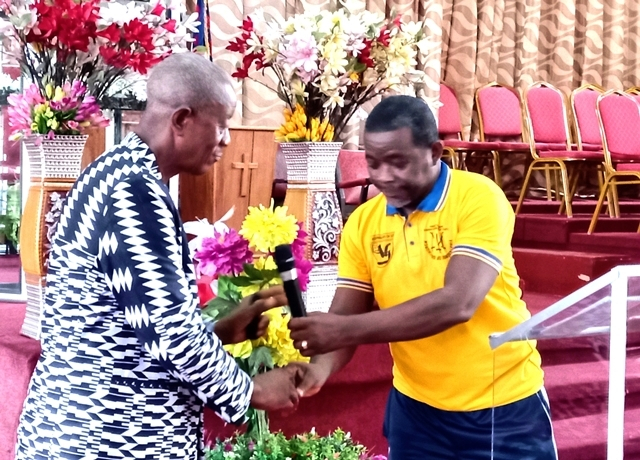 The LLA boss who was invited by the church as a special guest to speak on the importance of the Land Rights Law (LRL) of 2018, was accompanied by the LLA Communications and Outreach Officer, Mr. Emmanuel Chedeh Davis.

Chairman Manobah when speaking expressed thanks and appreciation to the leadership of the church for calling on him at a time when the Authority is engaged in informing, sensitizing, and educating the public of the importance of the LRL of 2018, LLA Act of 2016, Act Against Criminal Conveyance of Land of 2014, including other land-related laws, regulations, and guidelines.

"I am grateful to be called to talk to you about the importance of Liberia's land reform. Let me extend greetings to the leadership and members of this great church on behalf of the Board of Commissioners and staff of the LLA."

Further, when speaking of the importance of Land Governance, Land Administration, and Land Use and Management, the LLA boss said Liberia's land reform is not an event but a process that needs support to curb the challenges affecting the sector.

However, at the end of his presentation, Chairman Manobah informed members of the Church that the LLA is committed to working collaboratively with the Liberian people, the three breaches of government, Civil Society Organizations working within the sector, including the private sector to enhance Liberia's land reform agenda. He further said that on July 31, 2022, the LLA Board of Commissioners and Technical staff of the LLA will be engaged in a three-day legal and technical meeting with the Judges and Magistrates (Judiciary Breach).

Note: For more information on the LRA, LLA Act, AACCL, and other land-related laws, regulations, and guidelines, kindly tune into Freedom 89.7FM every Wednesday from 3:00 PM to 4:00 PM to listen to the technical staff of the LLA as they educate, sensitize and inform the general public of their rights, roles, responsibilities, and benefits as enshrined within LRA, LLA Act, the Act Against Criminal Conveyance of Land and other land-related laws, regulations, and guidelines, including the services being provided by the LLA across the country.