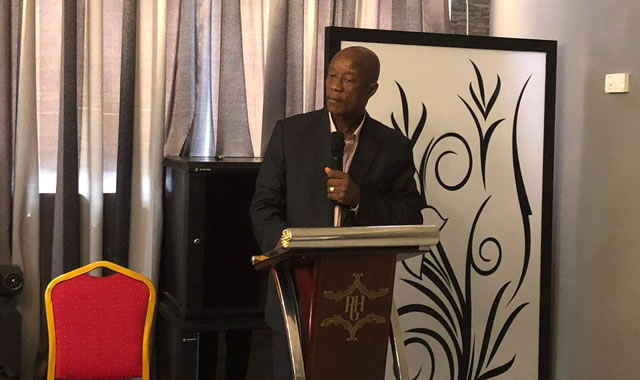 November 7, 2022, Monrovia:  The Liberia Land Authority/LLA with support from the World Bank through the Liberia Land Administration Project (LLAP), on October 26, 2022, held a one-day experience-sharing event on the updated LLA Field Manual on Systematic Formalization of Customary Land Rights.

The event brought together members of the LLA Board of Commissioners and technical staff, Civil Societies working in the land sector and representatives from IGNFI and Tetra Tech.

Speaking on behalf of members of the LLA Board of Commissioners (BoC) and staff of the LLA, Hon. Atty. J. Adams Manobah, Sr., praised the World Bank, the Swedish government, USAID, the Tenure Facility and all donor partners for the level of support given to the Authority. Chairman Manobah further praised the government of Liberia for the passage of the 2018 Land Rights Law (LRL) and the 2016 Act establishing the LLA.

"We have a greater responsibility as institutions working within the sector to ensure that services and provisions as enshrined within the LRA and the LLA Act are provided to the Liberian people. He said.

Chairman Manobah called on all to continue to help the LLA as the institution endeavours to make the laws visible to all across the fifteen subdivisions of Liberia.

However, the updated Field Manual, like the National Guide on which it was based, was developed based on lessons learned and experiences gained from theoretical and field training by the staff of the Community Land Rights Unit of the former Land Commission and the Community Land Rights Division of the LLA, as well as implementing partners such as Liberian civil society organizations (CSOs) and donors.

The Field Manual is primarily designed for the use by customary land-owning communities, CSOs, community-based organizations (CBO), and non-governmental organizations (NGO), working with customary communities to build on the work being carried out by the LLA and the consortium of CSOs in developing steps and procedures for the implementation of customary land rights recognition and documentation nation-wide.

The Field Manual outlines key steps and procedures to be followed in conducting the processes for the legal recognition of the customary land rights of communities. Lessons learned from the LLA’s pilots, including potential efficiencies to the customary land rights formalization process, were incorporated in each iteration of the Field Manual as new information was obtained, and processes refined.

However, the objective of the manual is to guide national stakeholders, including customary communities, LLA, CSOs, CBOs, NGOs, and partners to understand and follow the procedures in carrying out the customary land rights formalization process as well as a reference document for technical teams in the field, and to ensure that all required steps have been fully completed through an efficient review and verification process.

At the end of the event, IGNFI and Tetra Tech were praised by members of the LLA BoC, technical staff and representatives from CSOs for the level of work done.

The pilot was conducted in Lofa, Margibi and Bong Counties, respectively.

Did You Like This Post? Share it
« LLA Ends 4-Days Intensive Training on the utilization of the newly established geodetic network in Liberia LLA Staff Ends Training in Sweden »